Creativity is gold in marketing. Coming up with fresh marketing campaigns, though, is easier said than done. Here are 5 examples of out-of-the-box campaign marketing strategies. We hope these will inspire you to come up with your own new ideas.

Orphea in Milan created a giant insect trap using transparent glue placed on a billboard in the shape of aerosol spray coming out of the nozzle. Over time, insects and bugs got stuck in the glue. This created a huge and very visible insect trap that Orphea claims to have caught 230,000 bugs.

This unique marketing example uses shock value to make its campaign memorable. It appeals to the freaked-out reaction of bug-hating customers.

2. Museum of Science and Industry

The Museum of Science and Industry in Chicago ran the “Month at the Museum” contest to promote itself as a cool place for learning and entertainment. The call for applicants resulted in more than 1500 entries from all seven continents.

One winner was paid to live inside the museum for 30 days. She used social media platforms such as Facebook and Twitter to publicize activities and blogged about her experience.

Curious visitors could find out more about the winners’ activities while educating themselves about the programs at the museum. According to Public Communications, Inc., the results were astounding:

Oreo developed a few short videos to show how their cookies can be eaten as a snack and the different ways to enjoy them. The plan was to engage viewers by asking them to share their experiences. The strategy worked. Viewers started sharing new recipes mixed with ice cream, pies, and cakes on social media platforms such as Pinterest, Twitter, Facebook, and Instagram.

Oreo videos make effective use of social media. The 102-year-old company made snacking on Oreo cookies an art form. According to CPG Trends, these are a few reasons why the Oreo snack hack campaign worked:

As a result of viewer interest and engagement, Oreo achieved what they set out to do, which was to increase sales and product interest.

Metro Trains’ “Dumb Ways to Die” marketing campaign has one key goal: to promote rail safety. They produced a video with the same title and a catchy song featuring 21 bean-like cartoon characters doing things to get themselves killed. This video caught the interest and imagination of viewers.

The campaign went viral and has even spawned a game app for smart phones. According to Metro Trains, the campaign generated global media value of over $150 million. 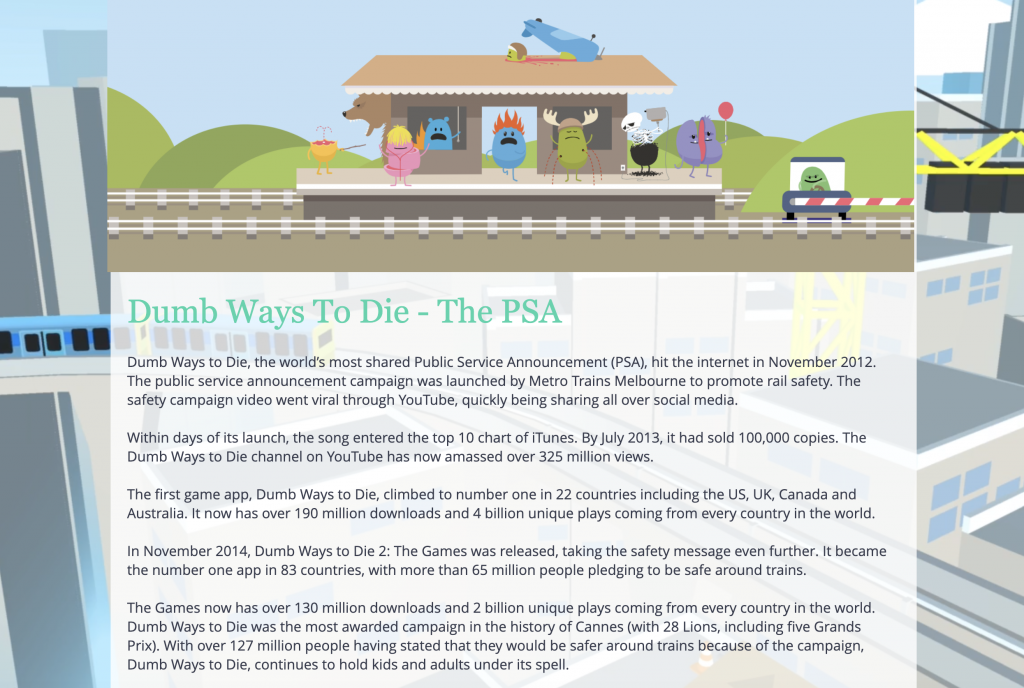 One of the best examples of customer personalization is Coca-Cola’s “Share a Coke Campaign.” In June 2010, the company launched an innovative program in Australia to create a connection to their customers. The concept was to introduce personalized Coke bottles or cans by printing Australia’s most familiar names on cans and bottles, replacing their well known label. Customers can find a bottle or can with their friends’ names on it and share this with their friends and family.

In Australia, the advertising agency, Ogilvy estimated that the campaign increased Coke’s share of the category by 4% and increased consumption by young adults by 7%.

Today, about 80 countries “Share a Coke.” Since then, Coca Cola has increased its sales by more than 2%. The campaign has also received multiple awards at the Creative Effectiveness Lion Awards.

Marketing is a process, one that allows you to experiment with new campaigns, make the necessary adjustments, and to learn what works best for your business.