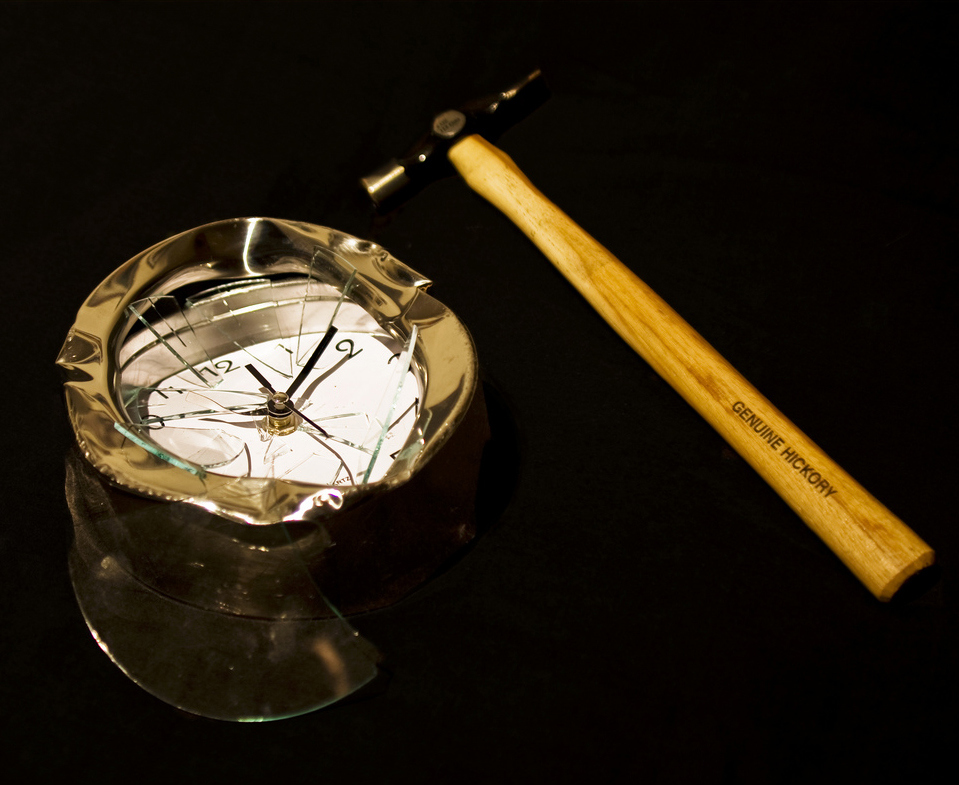 Creatives & Entrepreneurs: Turn Off the Clock

Back in middle school, I stopped wearing a watch (or rather, Swatch—because that’s how long it’s been since I’ve worn one). I was obsessive about checking it, internally yet sternly challenging the second hand’s laborious progress as it made its way around the face. Even in classes I enjoyed. Especially in classes that I didn’t.

I recognized then as I do now that it’s a nervous habit, constantly checking to see if I have more time, not enough time, how many more minutes, push, push, push—always that anticipatory looming, which causes just enough of an undercurrent of anxiety that it disrupts focus.

Now, we’ve created a Society of Distraction—email notifications, text messages, the tinny sound of an iPhone ringtone I keep changing because I cringe every time it goes off… We recognize these things as necessary evils, and they are. But for someone who already struggles with the stress caused by that immediacy of our time-centered world, it’s like torture.

Forbes.com’s “The 7 (New) Habits of Effective Entrepreneurs” recommends all manner of things that I’m already doing:

But Forbes and Lee Dumas are missing the biggie, the one thing that has slain the Mighty Distracticons:

YES. I no longer have the ability to check the time from the upper right-hand corner of the screen.

In fact, when I check in with the time, I see that I generally have more than I thought I would. And I have gotten more done each day by eliminating that river of anxiety that runneth through me. The overall output for the creative work I’ve done since I made that change… better than it’s ever been. Seriously.

You already use your phone for your appointment reminders (those I keep on, of course, with plenty of advance notice for meetings where I have to prepare). But beyond that and a rumbling in your tummy, do you need to know what time it is?

I don’t get the 2 PM post-lunch doldrums because I have no idea that it’s 2 PM. We program ourselves for this stuff. Someone at some point told us that that happens. So when we feel even an ounce of fatigue after lunch, we mentally allow ourselves to check out. Well, must be the post-lunch yawn wave everyone’s always talking about. I’ll just log into Facebook for a second… Maybe wander off for another cup of coffee. (Four hours later…) Shit—it’s 5:00 already?

“What about breaks?” you ask.

I have never nor will I ever believe in scheduled breaks. As I move down my list, if I feel like taking a break… I take a break. If I take three breaks in an hour in the morning, OK… I end up naturally working harder in the afternoon. That’s the ticket—naturally.

Your mind is conditioned by its own clock, which is why some people work late into the evening and seem to never get tired but then manage morning like they’re stumbling through Middle-earth.

(This is me. In fact, I don’t schedule calls before 10 AM because I recognize what a crazy dragon-lady / fog princess I can be before then. And yet, you’ll often find me happily and tirelessly plugging away at 9 or 10 PM. Why? Because there isn’t a time restraint. Weekends, it’s the same. I’d sometimes rather work on the weekends when there isn’t a 9-5 expectation.)

Here’s a novel idea: If you need to be told that it’s 5 PM, create an alert. You’re carrying an alarm clock and a calendar with you everywhere already. Use your cell phone to create a daily calendar reminder you can actually look forward to.

The idea is to restructure your day in a way that allows for flow and breaks the time barrier. I got to my desk this morning at 7:30 and I feel like I could easily keep working another 2-3 hours. But now I’ve just checked and see that it’s 5:38. So my time-conditioned brain says, “Time for a glass of wine. Time to think about dinner. I’ve been at it a long time today. Maybe I should stop after all.”

But if I hadn’t checked the time…