In 2014, students at the Harvard Business School banded together to raise more than $13,000 for ALS awareness and research—almost 33% more than their initial goal. The Ice Bucket Challenge video above is their “thank you” to their donors.

Start by crafting your campaign with care.

How does your organization plan to utilize its donations? Who benefits from these funds?

A video interview or a letter from someone deeply ingrained in the purpose of your campaign—your founder, a young girl learning to code, a family your team will feed for a month—offer the simultaneous benefits of informing your audience about your campaign in an entertaining way, while also acting as an emotional hook to get donors invested. 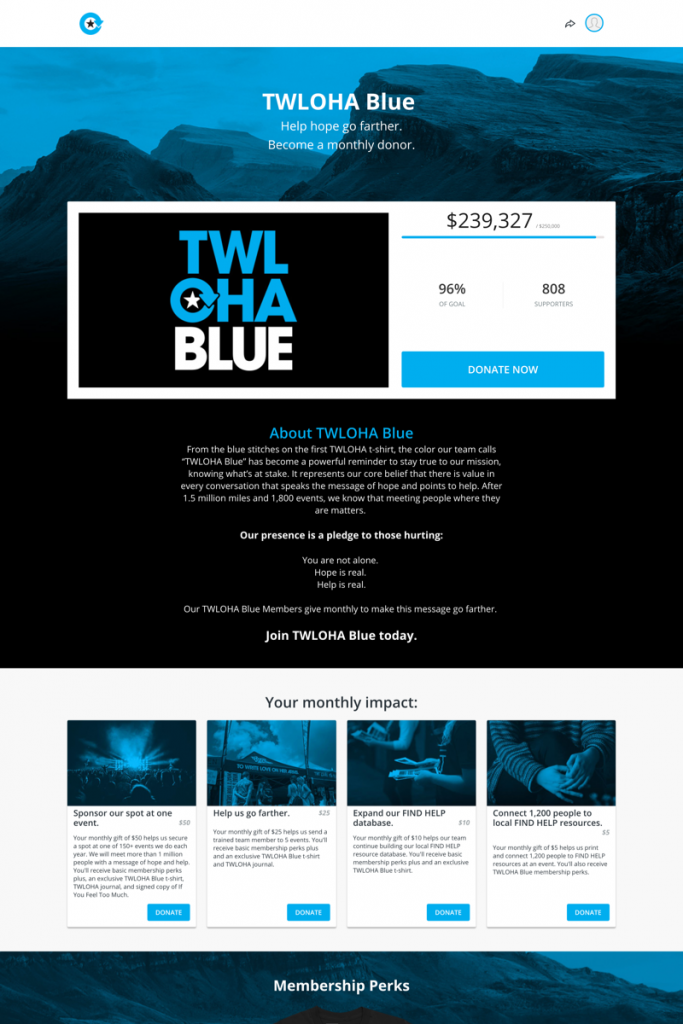 To Write Love On Her Arms (TWLOHA) uses a crowdfunding system based on monthly donation commitments to fund many of their programs. This is a great example of a story-based crowdfunding campaign, tastefully designed and featuring the TWLOHA Blue that the organization uses as their team color. (Image credit: TWLOHA via Classy.)

When choosing a crowdfunding site, make sure you read the fine print. Many crowdfunding websites charge exorbitant fees for cash-outs. Furthermore, some platforms—like GoFundMe and Kickstarter—cancel all donations if your campaign doesn’t hit its fundraising goal.

Another common crowdfunding pitfall is setting goals that are too high or too low. Based on previous campaigns’ successes and failures, identify an achievable goal for your audience. Your audience might surprise you! (But that’s what stretch goals and donor rewards are for.)

Registration requirements change depending on how fiercely your organization targets a particular state or demographic. For example, if you have a strong home team of supporters in your founding city and state, it’s a good idea to register with your state government if you expect that audience to respond positively to an online fundraiser.

As a nonprofit, your organization has a legal responsibility to protect donor information. Brush up on donor solicitation laws in your area, and—depending on the state you’ll be fundraising in—register with the state before asking for resident donations. For example, the National Association of State Charity Officials suggests nonprofits formally register before online solicitation if:

The specifics of nonprofit solicitation can be a little muddy, especially when we consider online donations and fundraising platforms. Therefore, it’s important to speak with your legal advisor before you get started.

A successful, engaging crowdfunding campaign starts by thinking of crowdfunding not as a viral social media campaign, but rather as an effort in peer-to-peer fundraising. Harvard Business School had great success sharing their story through personal networks—on social media, LinkedIn, and around the Harvard community.

Set donation milestones and share these with your audience. If you’re a few hundred dollars from your next milestone with an hour left in your campaign, communicating that to donors might be the exact nudge they need to commit to your campaign.

One great way to boost an online campaign is to host a live event on social media.

“Ask Me Anything” sessions, live interviews with key staff members, and simple “donation watch” sessions on Facebook Live all offer unique, fun ways to connect with your donors.

For example, hold a scheduled Q&A session with your organization’s founder. Ask donors and audience members to write in questions on social media, using an easy-to-remember hashtag to keep questions organized. Then, offer shout-outs and answers to viewer questions in a live video streaming session—and be sure to thank everyone by name or handle!

End on a high note.

When the dust settles, it’s time to celebrate. Even if you didn’t reach your campaign’s fundraising goal, it’s important to share your successes with your supporters. While you’re at it, don’t forget to thank your donors! The more personal you can get with your appreciation, the more likely your supporters will be to contribute to your next campaign.

Analyze your successes and failures. Identify any places where potential funders may have been turned away from your campaign, and make these your top priority for the next one. If you have the ability, speak with people who are on your communication lists but did not donate to your campaign. A simple survey asking why people chose to donate—or not to donate—can do wonders for informing your next campaign.