Should your restaurant be accepting Bitcoin?

Every day, millions of cryptocurrency users or investors (63 million as of this writing) push Bitcoin’s value higher. And as big players like Elon Musk publicly endorse the currency, the value will continue to climb.

“Assuming Tesla was purchasing Bitcoin around the time of its fourth-quarter earnings call, the company might have paid about $33,000 per Bitcoin. Prices are up about 70% since then, to more than $57,000, turning Tesla’s $1.5 billion stake into a roughly $2.5 billion stake.” [Tesla Is Up $1 Billion on Bitcoin Investment]

Those numbers are no joke. More and more consumers are getting curious and investing in Bitcoin.

However, with limited acceptance, cryptocurrency hasn’t hit the restaurant scene. What does this groundbreaking currency mean for restaurants? Should you be accepting Bitcoin? First, check out Daniel on Dwe decrypts’ YouTube video describing blockchain using a restaurant analogy. It’s a great primer.

Barriers to widespread U.S. use

For Americans to adopt cryptocurrency as a widespread form of payment, several well-known difficulties need addressing. Right now Bitcoin is:

However, as more people take strides to legitimize it, like one NYC bar owner, the trend will grow.

There is also an upside for restaurant owners—the opportunity to make money on the Bitcoin they accept. [An Overview of the Latest Digital Payment Options at Restaurants]

That’s the long game, and I don’t recommend it for restaurants in survival mode month-over-month. But Bitcoin value continues to rise, so restaurant owners can accept Bitcoin payments now with coins worth $52,000 that, if they hold onto the coin, could be worth hundreds of thousands of dollars (if the Winklevoss twins are right). 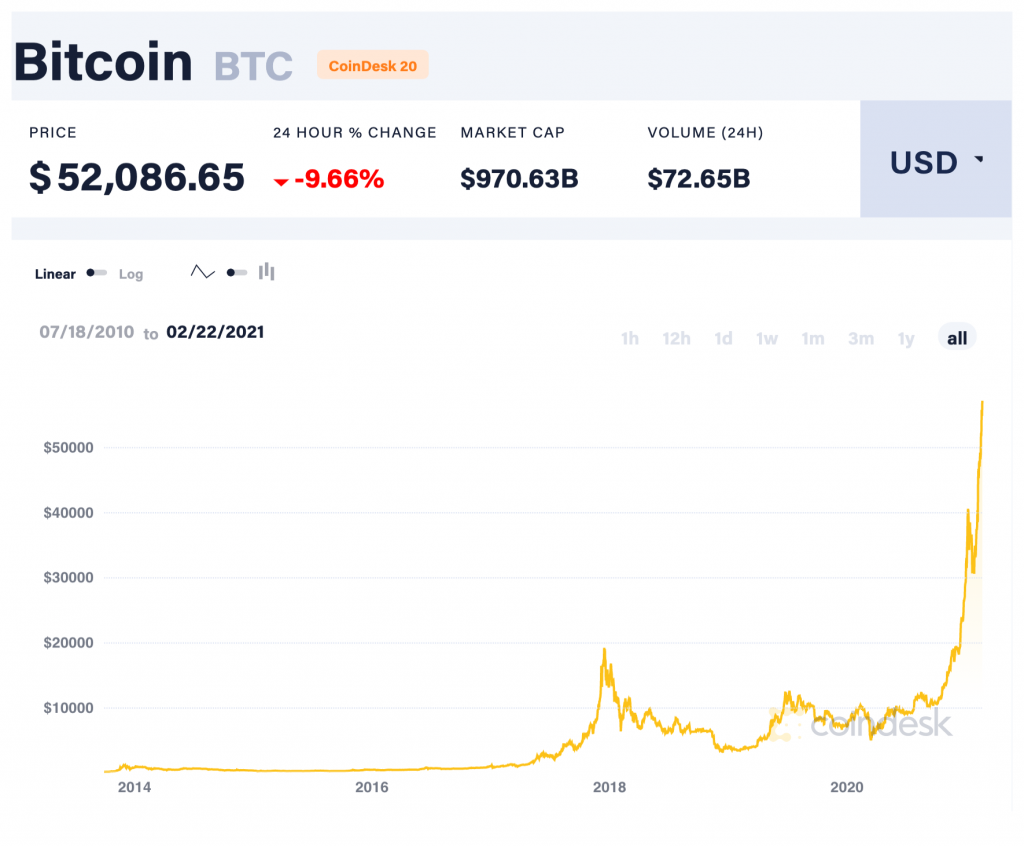 How do restaurants accept Bitcoin?

There are plenty of ways to do what are called peer-to-peer transactions. You’re probably familiar with some big names in the space: PayPal, Venmo, CashApp, Apply Pay, and Google Pay.

PayPal lets its 300 million customers buy bitcoin and spend it at any of the 26 million merchants it supports. [Bitcoin’s Recent Surge Creates New Billionaires]

But there are other platforms. If you’re researching a new POS, payment processor, app software, or the like, ask the question: Can we accept Bitcoin payments through your system? Restaurants need a platform that makes processing Bitcoin transactions easy.

Why do restaurants accept cryptocurrency?

If restaurant guests aren’t using bitcoin to pay for their cocktail hour drinks or delivery order, then why bother accepting virtual currency at your restaurant?

He hopes to lure new and younger customers to the Italian restaurant through the alternate payment systems.

Ajdinovski has the right idea in aiming for a younger, wealthier, tech-friendly crowd. Research completed by companies like Clovr, show:

Men are almost twice as likely as women to have invested in cryptocurrency.

2. Use for positive publicity and promotions.

Nicholas Kalcanides, whose family owns Helen’s Pizza, told the North Jersey Record that restaurants can afford to offer deals for those using digital currency because:

The relatively low transactions fees of 10 to 20 cents for Bitcoin and about 2 cents for Litecoin—compared to 2 to 3 percent for credit cards make it worthwhile.

Chef-owners add physical and digital signage declaring their adoption of cryptocurrency, which creates a unique selling point. Restauranteurs use publicity to differentiate their eatery from another restaurant down the street.

The infrastructure and market for bitcoin are already well developed.

And guess what? Major chains are already accepting it: Starbucks, Subway, Burger King, and where those guys go, their competitors will follow. But smaller restaurants accept Bitcoin too: from All Star Pizza in Miami to Sake Lounge in Olathe, KS to EVR NYC on 39th Street.

What do you think about Bitcoin and restaurants? Do you have a POS system you love that makes Bitcoin payments easy? Tell us!

At my grocery store weeks ago ,about 5 digital /bitcoin method of payment was issued to me which I rejected because i was a novice at that time, I got so eager to know more about it .I am the lazy type that doesn’t read too much so his option of surfing the net was a NO, we further extend the conversation by convincing him to recommend or referral of his crypto broker or any company.I got assisted accordingly with the opening of a blockchain wallet with my first ever $13000 alert which I received second of October after investing and trading

That is awesome—more cryptocurrency in restaurants!!